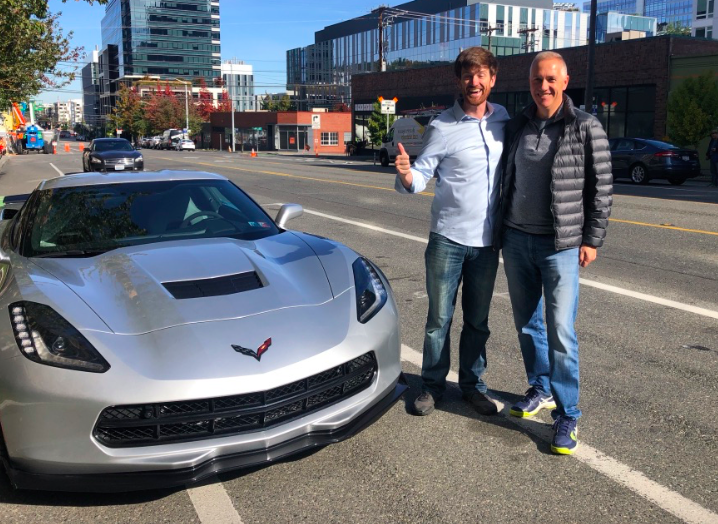 Brian from County Armagh in Northern Ireland is a successful tech entrepreneur.  Brian’s work brings him frequently to the States, but his exploration was mostly confined to hotels, conference rooms, and office parks.

For a couple of years now, Brian has been planning on exploring all those wonderful bits of America between the office parks, but the vastness of the country presented somewhat of a challenge:

I’ve had friends who’ve done road trips to the US, and I think one of the problems is that they try to do too much in one trip.  Because I’ve worked in the US for some 15 years, I knew there’s just too much to see here to do it in one trip.

Brian planned on taking a number of road trips in the US over several years, starting on the West Coast and working his way east.

Brian enjoys his cars, having owned several convertibles in his life (which, to his own admission, makes no sense in Ireland, but hey).  While there are no shortage of Kia’s for hire in America, Brian wanted something a bit nicer.  This presented another challenge:

Renting a nice car is either extremely expensive, or just not even possible.  Hertz has a nicer range of cars, but even those are only available at very few airports.  You can get any number of small, medium, and large SUV’s, but you can’t really get anything nice.  Even a convertible Mustang, or something like that - very, very limited access to them.

Brian wanted access to a nicer car, and for multiple US road trips, so he decided to buy one - and for Brian, an American road trip calls for an American car.  The Chevy Corvette Stingray caught his eye, and it’s not hard to see why:

Once Brian landed on a car, he turned his focus to the question “How to do it?”

We could not find how a foreign, non-resident could own a car in the US, until we came across visitor.us.

visitor.us took care of all of this before Brian arrived, so all he had to do was pick up his keys and start his first road trip.

Brian was kind enough to join me on camera to talk about his experience.  Watch now and learn more about Brian’s visit:

So if you’d like to buy a Corvette in America like Brian, even if you’re just visiting, get in touch with visitor.us today!

The Best App for Finding Campsites in the US

One of the greatest things about exploring the US is the wide range of camping options. From developed sites to freecamping on public lands, there are many opportunities to spend the night outdoors.But if you’re visiting from another country, what’s the best way to find these hidden local gems?