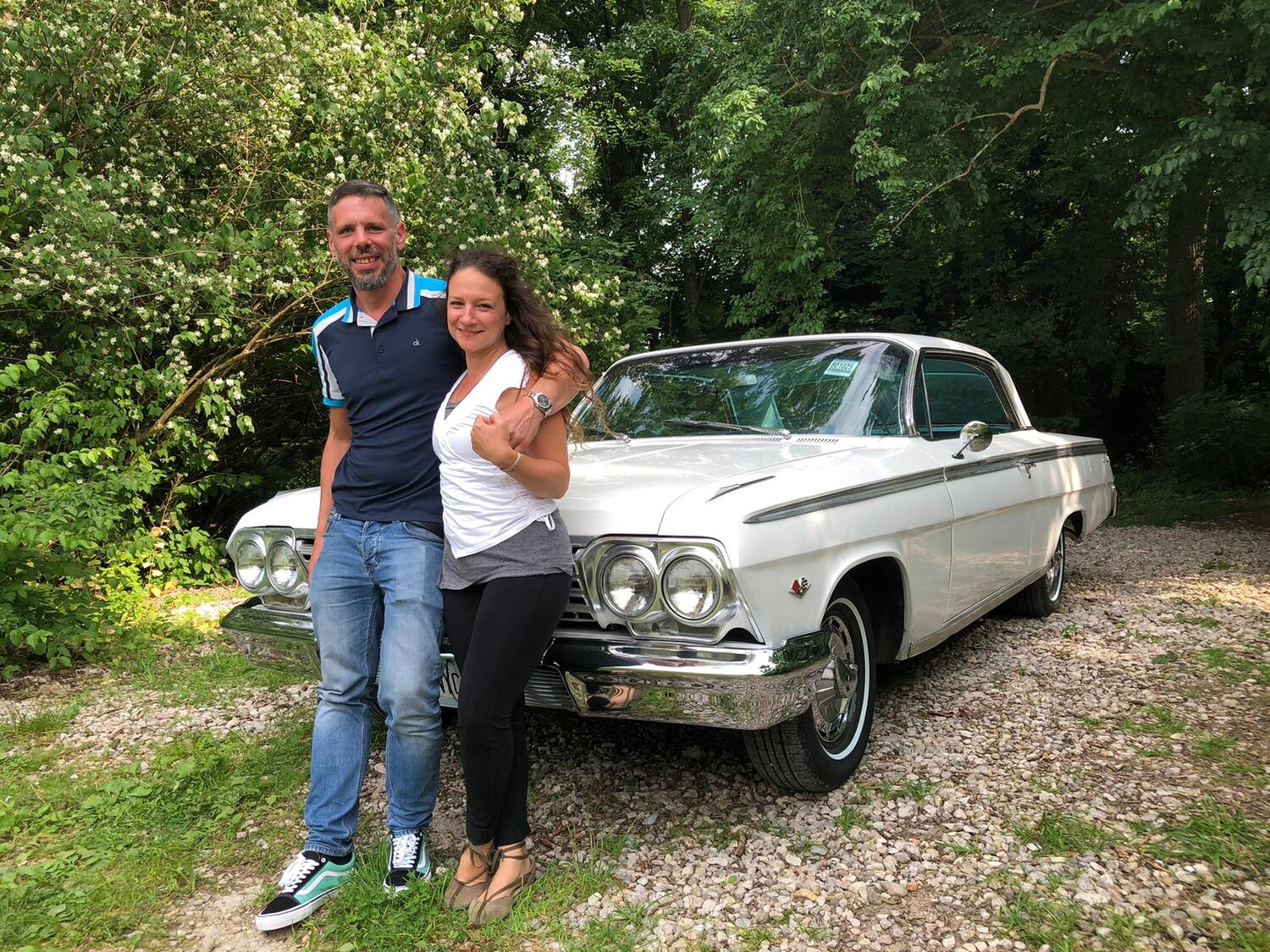 Georg from Baden, Austria had big travel plans for 2020. And like so many of us, he watched as Covid-19 completely disrupted global travel in March and April. Rather than give up, Georg simply revised his plans.

Georg from Baden, Austria had big travel plans for 2020.  And like so many of us, he watched as Covid-19 completely disrupted global travel in March and April.  Rather than give up, Georg simply revised his plans.

Georg, his wife Elisabeth, and two friends had it all planned out.  Georg found the car of his dreams, a 1962 Chevrolet Impala in ermine white with a turquoise interior, for sale just outside of Atlanta, Georgia.  The four of them would fly in, pick up the car, and spend the next several weeks making their way up to New York City, before shipping the Impala to Austria.

Sadly, Covid-19 made it impossible for Georg and his crew to complete the trip as planned.

Instead, Georg switched gears, simply accelerating shipment of the Impala to Austria.

The Impala cleared Austrian customs a few weeks ago, and is now in the loving care of its new owner.

Georg graciously agreed to document and share his experience - take it away, Georg!

I have been into classic American cars since I was about 15. It started with reading car magazines and by the time I attended the first US car meeting in Austria I was hooked.

When I saw the first third-generation Impala in a magazine, I had found my favorite car.

When I got my driving license at age 18 there was no way to get such a car as they were way too expensive or simply not available in Austria.

By getting an Instagram account and following the American car scene the urge to own an Impala grew to a point where I decided to finally fulfill my dream. That was in mid-2019.

Buying a car in Austria or another European country was never an option to me because I wanted to experience dealing with the people from the country where these cars are domestic, share my excitement for those cars with them, see the American car scene with my own eyes and combine the purchase with a trip overseas.

I knew that it had to be either a ‘62 or a ‘64 Model and that white was my exterior color of choice. The interior could either be blue, green or turquoise.

After I missed out on a nice Impala from East Los Angeles on Instagram I was kind of gutted, but a friend of mine said that the next one would come along.

Later that same day, I browsed eBay (a platform I did not usually use) and there was an auction located in Georgia for a white 1962 Impala SS with a turquoise interior that just looked gorgeous.

I got super exited but figured I had not really thought through the process of buying, registering and insure a car in the US without being a citizen or having a residency.

The reason I needed to do this is that I wanted to do a road trip to New York with my newly acquired car legally and properly insured.

I started to gather information in European Forums and the tenor was it could not be done!

Although Wendell from Southern Hot Rods (the seller) had already had international customers and was extremely helpful, he had no solution either.

That’s when I found visitor.us.

I loved the fact that the business idea spawned from the same problem I was facing and that Matt had already solved it for me (although the other way round as he is American).

I wrote Matt, he answered a couple of my questions and we agreed that he, from now on, was part of “Project Impala.”

The bid I placed a few minutes before the end of the auction was rejected by eBay because of my “insufficient activity in the last couple of months” – I was devastated! Not willing to give up, I wrote an email to the seller, as the car had not met the reserve, and we agreed on a deal!

The first expensive pitfall Matt saved me from is that if I had the car registered in Georgia I would have paid the state’s 6.6% sales tax for the car (versus Montana’s 0% sales tax).

My LLC was set up within days and Matt took over most of the correspondence with the seller.

Another important fact is that Georgia does not issue a title for cars built before 1986. For the import process to Austria a title is mandatory so my new Montana title came in handy.

I must admit wiring a (to me) big amount of money to a person I never met for a car I had never seen in person was a bit scary.

We booked flights for my wife, two friends of mine how wanted to accompany me for a part of the three week trip and myself and started to plan our route from Houston via Atlanta to New York City from where the car would be shipped. I was about to go on the journey of my life!

Matt used the time until our arrival to get the title, the registration and the insurance sorted, got me a shipping quote and personalized license plates that reflected the route we were about to take.

By early March 2020 COVID-19 had arrived in Europe closely followed by the US. By March 11th it became clear that there was no way to enter the United States for our group of fellow travelers.

At that point I was (naively) hoping that the situation could be under control by mid-April when our trip was planned.

My optimism shrunk instantly as I saw how the situation in Italy and later New York City developed and Austria was under lockdown for about 6 weeks starting March 16th.

Shipping the Car to Austria

On April 1st I pulled the emergency break.  We arranged delivery of the Impala to our chosen shipping company in New York, and the car was picked up from Southern Hotrods on April 15th.

After US customs clearance, the car left New York on May 1st and arrived at Bremerhaven on May 13th.

If you know the name of the vessel your car is on it is fun to follow it online via one of the various free websites.

After being transferred to Austria on a truck the import process started.

Importing a Vintage Car to the EU

There are major differences between importing a vintage car compared to a new one to the EU.

Let me explain: A vintage car has to be older than 30 years, in (mostly) stock condition or used in a historic event (that almost never applies).  An independent expert has to assess that the car is in good stock condition.

I opted to import in Austria because I wanted to be close if there were any issues.

Keep in mind that the tax is calculated from the price stated in the bill of sale, plus the cost for transportation from the US to Europe. In Austria, there is a list of historic cars that fit the requirements of EU Tarif-Pos.9705, and luckily the 1962 Impala is on that list!

The last steps of the way

On June 17th my phone rang and a friend of mine told me that he had just seen my car on a truck in my hometown of Baden.

I told him that he must be mistaken because I asked the shipping company to inform me of delivery two days in advance.

He insisted that it was my car, and what are the odds that a white 1962 Impala is driven through town on a truck?  (As far as I am aware it’s the only ‘62 in Austria).  So I ran out of the office, hopped in my car and started looking for the truck around town.

On my second guess I found the Truck unloading BMWs at a local dealer.

I arranged a meeting point with the truck driver on a quiet street around the corner of my house and (despite a dead battery because someone – it was the truck driver – had left the lights on) could finally take my new car for a spin around town.

The last piece of the puzzle is to get the car registered, which is a real pain in Austria.

The local authorities (similar to the DMV) will thoroughly check the complete car and the smallest technical issue can make them send you home without their ok.

There are also some modifications to do first, such as yellow turn signals in the front and rear, marks on the speedometer for specific speeds in kph, and European H4 Headlights.

Although not everything went according to plan as far as my travels go, I am happy to have experienced this thrilling adventure.

I am hoping to get another shot and next time will be able to pick up my car in person.

One thing I know for sure though is that my partners overseas will be visitor.us and Southern Hot Rods.

In the meantime I will enjoy driving my 1962 Chevrolet Impala.

We’re grateful that Georg entrusted his visit to visitor.us, and we’re looking forward to helping him come visit the US when Covid-19 is in the rear view.

If you’d like to buy a classic car in America and bring it home with you, like Georg, get in touch with visitor.us today!