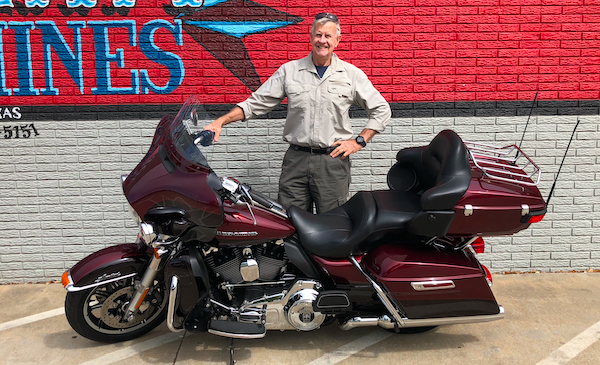 Aussie Will and His American Harley

Will from Western Australia has been to the US many times, but only for a few days or weeks at a time. In 2018, he got the chance to fulfill a lifetime goal: spending three months exploring America on a Harley.

Will from Western Australia has been to the US many times, but only for a few days or weeks at a time.  In 2018, he got the chance to fulfill a lifetime goal: spending three months exploring America on a Harley.

With his ESTA visa waiver granted, Will ran into a massive obstacle: renting a bike for that long would have cost him a whopping US$ 18,500.

It would not have been viable without being able to purchase a bike, because with the rentals - the cost was just so prohibitive. A few days is ok, but to do 90 days, I just could not do it.

Instead of renting, Will bought a 2014 Harley Davidson Electra Glide for $15,660.  (Even if Will left the bike in a ditch, he would have been better off than renting!)  visitor.us registered and insured it ahead of his arrival, so all Will had to do was pick up his keys and go.

But you don’t have to take our word for it.  Watch this video and let Will describe his experience in his own words:

So if you want to buy a bike in America like Will, even if you’re just visiting, get in touch today!

Georg from Baden, Austria had big travel plans for 2020. And like so many of us, he watched as Covid-19 completely disrupted global travel in March and April. Rather than give up, Georg simply revised his plans.

In 2019, Pete and Amanda flew from New Zealand to Chicago and started the trip of a lifetime. When it was completed in the late 1920’s, Route 66 became the easiest path for Americans to migrate West.

Fundamentals of Buying a Car in America: Transfer of Ownership

If you're a tourist, a student, or on business, buying a car (or a van or an RV or a motorcycle) in America as an international visitor can be confusing. Buying, registering, and insuring a vehicle in America is not at all straightforward if you don't live here or have just moved. That's why we're putting together this series, called Fundamentals of Buying a Car in America, to help de-mystify the subject. This article focuses on the fundamental of ownership transfer.